I still remember the day my mind was blown by a video game. My dad was something of an early adopter of the PC culture and was always tinkering with computers. Occasionally he would run into a problem that he couldn’t solve so he became a regular at a local computer repair store. On one of these trips I tagged along (probably because I was volun-told I would). Then my world changed. On the monitors being demonstrated for the world to see was a new game caled Wolfenstein 3D!

The Wolfenstein plot was not all that revolutionary. The player’s avatar, BJ Blazkowitz, infiltrates a Nazis castle and has to fight through several levels of Nazis soldiers to eventually take out Hitler himself. What was revolutionary though was the graphics! This was the game that help spawn the First Person Shooter movement. Instead of a side scroller like Super Mario or Metroid, Wolfenstein let the player see through BJ’s eyes. What’s more, the levels were 3D which meant that the player felt like they were actually walking around the castle! By modern standards the graphics are archaic but at the time a young Mr. Powley was enthralled.

Ive often thought about how a First Person Shooter can inspire classroom design. Most FPS are inherently violent. Most of the time the players avatar is heavily armed and attempting to shoot living targets. 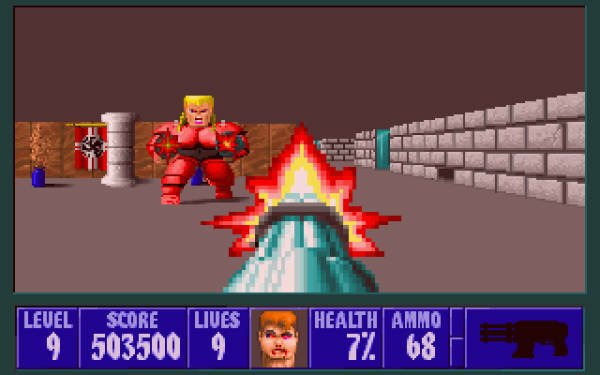 There are some ‘serious games’ that attempt to use the format without the weapons. A game called “Gone Home” is based on solving the puzzle of missing family members by finding clues in an empty house. It’s the FPS format but without the violence. For the classroom though Wolfenstein 3D had one other really interesting feature:

Anyone that has played Wolfenstein knows exactly what I’m talking about. Clear a room and then go along each section of each wall hitting the open the door button. I think the colloquial term was “wall humping” based on the grunting sound BJ made as he searched. The great thing, gameplay-wise, about finding hidden rooms was that the rooms were full of treasure, ammo, and health. Finding a hidden room,might be just the thing needed to get through a tough level. There are deeper motivators at play though and they are connected to the Free Spirit and Socializer types – exploration and relatedness.

Free Spirits want to interact with the game world and this can mean exploration. Easter Eggs, or hidden surprises throughout the game, allow for this exploration without making the search a requirement in the game. So what are some ways to bring this element into the classroom? I have a few favorites.

The other motivator – Relatedness – comes with the sharing of the secret. Guilds and other communities increase bonds and shared purpose through the sharing of embargoed information. There is a special glee in finding a secret that you can then share with your friends. For some game players / students this can also be a status reward. He or She was the ONE that found and shared the secret!

So take it from BJ Blazkowitz. Nazis are bad (but don’t go around shooting them) and Easter Eggs are good. Have fun hiding!