I have some posts in the pipeline that I’m a bit nervous about posting. They are a bit on the Dark Side but I write what I’m thinking and feeling. They’ll leak out eventually.

Before I post those I have been dealing with something much more fun – family illness. Over the last week I have spent three days at home with at least one of my sick boys. This meant no time to get any actual work done but it did give me plenty of Netflix time. Hanging pit with the boys required family friendly shows and MAN was I happy to introduce my boys to a childhood favorite! 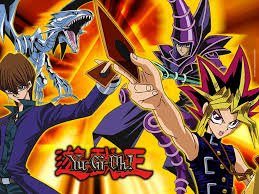 YEEAH! The entire series is on Netflix! My goodness did they crank out this epic anime! Season 2 alone has 45 half hour episodes! If you are not a Yugi fan (yet) it is a cartoon based on the trading card game of the same name (called Dual Monsters in the show). In the show Yugi and his friends battle larger than life villains by dualing them in the card game. The stakes varying in each dual but ultimately the fate of all mankind hangs in the balance. (In one very Meta Moment in season 2 one minor character says “isn’t this just a game” right before we the audience learn about the Shadow Realm that can take a player’s soul!)

What does this have to do with education?

First, I love the idea of trading card deck building games as a class foundational structure. Cards can be used as item power ups, rewards, mission guides, organizational tools, etc. Using mtgcardsmith (my guide) and a color printer it is easy to print high quality custom cards that fit your personal game. Students can build their decks to personalize their experience. Physical easter eggs can be hidden around the building.

A second revelation as I snuggled my 1 year old watching Joey Wheeler battled Mako Tsunami (yes thats his name) and his Legendary Fisherman card was how the Story teaches the viewer how to play the game. I don’t know if this was the original intent but tge intended audience for the cartoon is the pre-tween crowd. The actual Yugioh deck building game though is definitely aimed at a teenage crowd. The game requires deep reading and parsing the language of the cards in an almost legalistic sense. The tv show functions as a tutorial to explain how to play the game. Cynically, this is a marketing tool to increase sales but in a practical sense it is an excellent tool to increase engagement with the game! Obviously other games have had the same thought. Pokemon. Bakugan, and Beyblades all have shows in a similar vein.

This is one reason why I think storyline in the classroom is important. By creating a story that embeds the content the player (student) will more organically learn the content. No one wants to sit and read the the video game manual or the list of rules to play Yugioh. They will watch Yugi battle Merick with a trip to Shadow Realms on the line! While doing so the learn about Attack, Defense, Spells, Traps, Sacrificing Summons, Fusion Monsters, and more with the fate of the world in the balance! I bet I can figure out how to make the Causes of the Civil War interesting!